Magda Gobran, famous both as Mama Maggie and Egypt’s Mother Teresa, was among the five winners of the Arab Hope Makers awards offered by Emir of Dubai, Sheikh Mohammed bin Rashid Al Maktoum, who is also Vice President, Minister of Defence, and Prime Minister of the United Arab Emirates.

The five Arab Hope Makers are Ma’ali Al Asousi, the migrant of hope to Yemen; Hisham al-Dahabi, the golden heart of Iraq; Mama Maggie who is in service of humanity in Egypt; Nawal Al Soufi, the refugees’ lifeline in Italy; and the White Helmets, who find life in the rubble of war-torn Syria.

“No force stronger than hope”

Each of the inspirational givers of hope takes home one million dirhams to fund and extend their impactful work. They were selected from among more than 65,000 participants from 22 countries, who have all dedicated their lives to spreading hope and helping communities, especially the less fortunate, throughout the Arab World. They were short-listed to 20 individuals who were invited to Dubai in April to further discuss their humanitarian work. A jury narrowed them further to five.

On the evening of Friday 19 May a grand ceremony was held at Dubai Media City’s Sound Stage to choose the Arab World’s most inspirational Hope Maker. Sheikh Mohammed bin Rashed was there to honour the winner who was to be chosen from among the five finalists who attended the ceremony. The audience of 2,500 included ministers, officials and media professionals. But Sheikh Mohammed bin Rashid made a surprise announcement: he extended the top award to all five nominees in a moment that astounded the packed crowd. He redrew the rules to declare that every one of the five Arab Hope Makers was deserving of the ultimate prize.

In his speech Sheikh Mohammed bin Rashid said, “There is no force stronger than hope for revitalising societies. We wish to spread hope to as many young people as possible, so they may carry its spirit and dedicate their time to serving their communities. The Arab Hope Makers we see here today prove to us that regardless of how bleak the situation may seem, there is still optimism in the Arab World … it is time we celebrate the real heroes and role models, the Arab Hope Makers who have sacrificed their lives to serve others.”

Mama Maggie, whose work is among the most destitute of Egypt’s garbage collectors community, gave a word in which she said that a person is here on earth for a limited time. During that time, she said, one should realise one’s worth and one’s potential, and should use that to serve humanity and extend love to others.

Mama Maggie’s work is extensive; she is the founder and active operator of the non-profit charity Stephen’s Children, which began in 1985 as a small enterprise in Cairo but has extended to cover all Egypt, offering care to some 30,000 children and their families across Egypt.

Stephen’s Children cares for children aged seven to 18, helping them and their families cope with spiritual, psychological, health, and social needs through community-based education centres. These include pre-school programmes based on the Montessori method, as well as basic Bible classes. For the older children, there are distinct educational programmes that teach them not only reading and writing in both English and Arabic, computer use and the fundamentals of knowledge. Monthly sessions are organised for mothers, during which expert speakers offer advice on hygiene, psychology, and family economics. Health care for needy families includes medical tests, treatment, and surgeries.

In April 2016, Wataninet posted a feature in which Watani’s Lucy Awad talked to Mama Maggie, and reported on her life and extensive work. 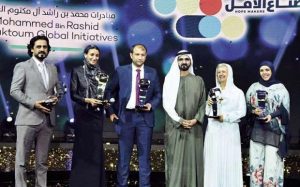